A Gobal Tally on the Biggest Wind Turbines

Wind alone contributes 1800 TWh of world’s electricity. That’s about 6% of the world’s electricity. We at Prospero Events had already covered which are world’s largest wind farms‌ powering countries. Now we are rounding up the most powerful wind turbine models (commercially deployed as well as in prototype) that are dotting the world and evolving to the needs of the wind energy market. Not surprisingly, most of them are offshore. 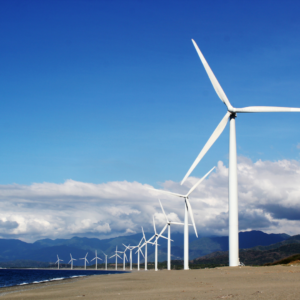 At 11 MW capacity and 200-metre rotor, the SG 11.0-200 DD has evolved through the generations as a sturdy offshore wind turbine. Often considered their flagship wind turbine, the SG 11 model has a significant share in the 1,400 Siemens Gamesa offshore Direct Drive turbines installed world-over. The recent partnership with Ørsted for its two offshore wind power projects in the German North Sea (of 1,142MW) will see the upgraded version of SG 11.0-200 DD.

The Vestas 164- 9.5 has a rotor diameter of 164 metres and produces 9.5 MW of power. MHI Vestas 164-9.5 MW turbines are already powering the Belgian, UK, and Germany grids. In fact, MHI Vestas Offshore Wind produced its 500th V164 nacelle at its facility in Lindø, Denmark, in 2020. The upgraded version of this MHI Vestas’ V174-9.5 MW is already in the works and is ready for its first rollout for the Baltic Eagle and Arcadis Ost 1 offshore wind farms in Germany.

With a larger aerodynamic 167-metre rotor and 81.4-meter-long B81 blades, the SG 8.0-167 DD can churn 8 GW of power. This may not seem like a huge capacity compared to some of SG’s other models, but it’s by far the most popular one in the group, with over 1,000 units being installed globally.

SG 14‑236 DD, the new ‘kid on the block’ for Siemens Gamesa, has a 236-metre diameter rotor, a capacity touted at 15 MW. The model is a successor for Siemens Gamesa’s existing flagship turbine, the SG 14-222 DD. Made from recyclable blades, it can produce 30% more Annual Energy Production (AEP) than the SG 11.0-200 DD. The latest from the European energy company has seen favour with Vattenfall for its 1.8 GW Norfolk Boreas and the 1.8 GW Norfolk Vanguard wind farms off the UK coast.

The Haliade-X is considered an industry first. It not only came up with the first 14 MW offshore wind turbine platform but also claims to operate in different conditions at different output levels. One rotation could power one UK household, GE claims. Currently, though, it stands in troubled waters over a patent issue with Siemens Gamesa.

The Chinese original equipment manufacturer (OEM) announced its new offshore turbine with a 211-metre rotor diameter that could produce 13 MW from its D10000-185 wind turbine. It can power 20,000 households annually. It has got into a wind turbine supply agreement with Fujian Energy Group in 2020 for the Changle Waihai Area C offshore wind project in China.

MingYang Smart Energy, another Chinese OEM in this list, could grab the title for the most powerful wind turbine in the world. In 2021, the Chinese OEM announced MySE 16.0-242, an offshore hybrid drive wind turbine designed with a diameter of 242 metres with blades measuring 118 metres long. It could surpass GE Haliade-X and SG 14-236 DD when it starts prototype production in the first half of 2024.