Nucor, one of America’s biggest steel companies has announced that it is investing $15 million (€13.76 million) in NuScale Power, a developer of small modular reactor (SMR) nuclear plants. 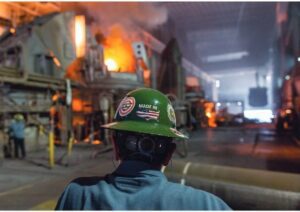 An employee at one of Nucor’s steel mills. Credit: Nucor website

Nucor, one of America’s biggest steel companies has announced that it is investing $15 million (€13.76 million) in NuScale Power, a developer of small modular reactor (SMR) nuclear plants. Nucor has entered into an agreement to fund NuScale via a private placement in the Special Purpose Acquisition Company that intends to merge with NuScale. This capital will support the path to commercialization of NuScale’s proprietary and innovative SMR technology: the NuScale Power Module.

Leon Topalian, President and Chief Executive Officer of Nucor Corporation said: “Sustainability is driving the business decisions of leading companies around the world. As America’s largest steel producer and a significant energy consumer, we are looking for safe and reliable sources of power generation that are consistent with our sustainability goals. The continued development of small modular nuclear reactors is critical to ensure our nation has carbon-free, baseload power, which is why we are making this investment in NuScale.”

In a press release, Nucor said SMRs are nuclear reactors that can operate independently or in tandem with other modules to produce carbon-free electric power on a smaller scale and at a lower cost than traditional nuclear power. The Nuclear Regulatory Commission has approved NuScale’s technology, representing a significant milestone that no other SMR developer has achieved.

Nucor said it has also supported the development of solar and wind energy projects through three Power Purchase Agreements it has entered into in the past two years, which will help enable the construction of 600MW of renewable power generation. This investment in NuScale complements these efforts to help the United States develop new sources of clean power. According to Nucor, an effective electric grid requires both baseload and intermittent power sources, which is why both nuclear and renewable energy must be part of the solution to achieve carbon reduction while maintaining grid reliability.