Audi has confirmed that it will not be developing any new engines which run on petrol or diesel. Effective immediately, the auto manufacturer has ended development and innovation on internal combustion engines. Markus Duesmann, Audi’s CEO and Chairperson of the Board stated in an interview to a German auto magazine that the company had taken the decision because of the stricter emissions standards that will be implemented in the European Union by 2025. 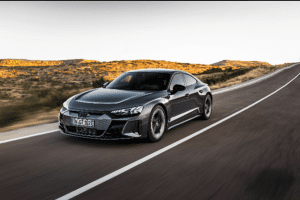 However, Duesmann also clarified that while the company has ramped up efforts towards electrifying its fleet, it is not looking to convert to battery vehicles exclusively right away. Alongside research and innovation on sustainable transportation, Audi will focus on modifying its existing internal combustion engines to meet the new emission standards. Duesmann admitted that this was going to be a challenging proposition for its engineers since the standards are expected to be significantly restrictive.

In recent years, Audi has stepped up its efforts to offer electric vehicles in a wide variety of affordable models. In addition to two previous models, the auto manufacturer will be introducing a new model, the Q4 E-Tron which will be its most affordable electric vehicle so far. It will also be converting its older models – the A4, A6 and A8 – to electric vehicles only by the end of this decade. The company has also been exploring innovations in battery cells and energy storage. Currently, Audi is studying the feasibility of repurposing terminal car batteries for powering homes and businesses. It has committed to becoming a carbon-neutral manufacturer globally by 2025.

Audi’s associate company, Volkswagen has also announced plans to accelerate its transformation to electric vehicles. By the end of this decade, Volkswagen will finish constructing 6 large-scale battery manufacturing factories. By 2023, the company has also decided to use its proprietary prismatic battery cell design in vehicles being made by all auto manufacturers under the Volkswagen Group. The company is confident that this move will help equalize prices of electric and petrol vehicles.

Audi’s announcement comes at a time when many auto manufacturers around the world are moving towards ending fossil fuel-powered vehicles entirely. Recently, Ford announced its intention to go 100% electric by the end of this decade. It is hoped that other vehicle manufacturers take note and work towards building a more sustainable transport sector.