Austria, the Netherlands and Hungary have flagged concerns about EU plans to ensure the bloc’s gas storage is at least 80% full by 1 November. The three member countries are worried that they would bear a disproportionate amount of the cost. 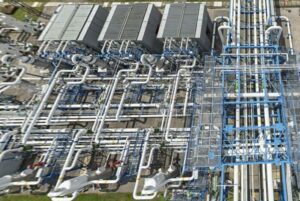 A top view of Zsana LNG terminal, one of the 4 operated by Hungarian Gas Storage Limited. Credit: HGSL website

Austria, the Netherlands and Hungary have flagged concerns about EU plans to ensure the bloc’s gas storage is at least 80% full by 1 November. The three member countries are worried that they would bear a disproportionate amount of the cost.

In reaction to the current high gas prices, the European Commission tabled proposals last month obliging EU countries to fill up their gas stores to at least 80% ahead of next winter and 90% in the following years. The proposal was tabled just before a two-day EU summit on 24-25 March where EU leaders debated energy security amid gas supply tensions caused by Russia’s war in Ukraine.

The amount of gas EU countries can store varies widely and depends on geography, such as the presence of underground salt caverns. Countries with high storage capacity – Austria, the Netherlands and Hungary – have sought assurances that the cost of storage would be evenly spread and that they won’t be sidelined when the proposed regulation comes to a vote in the EU Council of Ministers.

At their March meeting, some EU leaders warned that the proposal could force them to buy gas at the current high prices and then sell it at a loss to countries without storage when prices fall later on. To allay these fears, the French EU Council presidency committed to side with countries that have large storage capacity and create a blocking minority.

At a press conference, the Dutch Prime Minister Mark Rutte said: “In the very unlikely case that this legal complication would present itself, there’s a political agreement that we would have this blocking minority if a decision is pending that would go against the interests of Austria, Hungary and the Netherlands.”  Asked by a journalist whether filling gas storage would result in a huge bill for the Netherlands, he said: “That’s not what’s going to happen. In this scenario, the deal is other countries will pay for their fair share.”

Gas storage typically covers 25-30% of EU gas consumption in a typical winter and plays a key role in guaranteeing the EU’s security of supply. Solidarity would mean countries buying gas at the same price at which countries storing it originally bought it, an EU official told the media.

Another idea is for countries to be responsible for providing gas storage for a certain share of their domestic gas consumption. Austria, Germany, Belgium, Italy and the Czech Republic are pushing for another emergency meeting of energy ministers before the next European Council is held in June. This would be the third emergency meeting of energy ministers since the crisis began in the latter half of last year.

You can also look at our upcoming events for a deeper dive into the hottest topics in the European Energy Industry.