Sweeping the title from GE, Vestas announced the release of its new 15MW wind turbine which is currently the world’s biggest offshore wind turbine; EnBW ordered them for its most recent offshore wind farm in the German North Sea, the 900MW He Dreiht 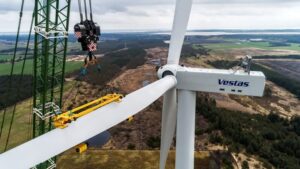 Early this year Danish wind turbine manufacturer, Vestas announced the launch of the V236-15.0MW, the world’s biggest offshore wind turbine. It beat American energy giant GE in the process which had held the record so far. Vestas has now achieved commercial viability for its mega-turbine with German energy company EnBW placing an order for the same.

EnBW will employ the turbines for its He Dreiht wind farm, which has a distinction of its own. The 900MW farm is Germany’s first subsidy-free offshore wind farm and will be located in the country’s North Sea territory. EnBW won rights to develop and operate the farm when Germany conducted its first offshore wind auction in 2017.

Vestas’ gigantic wind turbines are capable of producing 80GWh every year, as long as specific environmental conditions are met. Each turbine has a rotor diameter of 236 meters. One complete orbit of each rotor fin covers an area of over 43,000 square meters. This produces enough energy to potentially power 20,000 homes. The installation of these turbines is expected to begin in the middle of 2025. The wind farm will be ready to begin operations by the end of the same year. If EnBW proceeds with the order and converts it into an unconditional arrangement, this will be Vestas’ first such commercial deployment of their biggest turbines.