The government of Rio Grande do Norte in Brazil and Enterprize Energy, an offshore wind project developer have signed a memorandum of understanding to develop offshore wind farms and produce green hydrogen, ammonia together 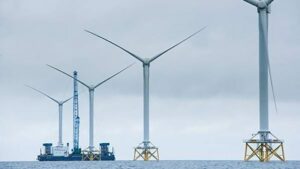 The government of Rio Grande do Norte in Brazil and Enterprize Energy, an offshore wind project developer have signed a memorandum of understanding to develop offshore wind farms and produce green hydrogen, ammonia together. The partners will work collaboratively with multiple stakeholders to promote the decarbonisation of industrial processes, while also engaging in the planning of the proposed new port facilities in Rio Grande do Norte to support such offshore energy developments.

The province of Rio Grande do Norte has been the largest producer of onshore energy in Brazil. The region’s government now has its eyes on exploring opportunities in offshore wind energy. The region has also been adversely affected by frequent droughts, and the environmental impact of hydropower plants have raised alarms. Given these conditions, Rio and other Brazilian states have been searching for new energy systems that can utilise its extensive coastline.

Jaime Calado, Secretary for Economic and Commercial Development of the Rio Grande do Norte State Government, said: “We are pleased to be working collaboratively with Enterprize Energy to identify and develop the numerous exciting opportunities off the coast of Rio Grande do Norte to unlock future sources for our nation’s energy. With these site and impact assessments, we can move toward the establishment of a centre of excellence for offshore wind and green chemical production in Brazil.”

Enterprize Energy will honour the memorandum by identifying and developing sites which hold potential for multi-gigawatt offshore wind projects. This will include environmental and socio-economic impact assessments. The partners are keen on developing hybrid projects which support both desalination and production of green hydrogen. Enterprize Energy will also be responsible for assessing the economic viability of such projects for local supply as well as export.

Ian Hatton, the Chairman of Enterprize Energy, said: “In addition to offshore wind’s capacity to decarbonise energy supply, advances in wind-driven electrolysis should enable Rio Grande do Norte to become a centre for green, zero-carbon hydrogen and ammonia production in South America. These ‘renewable gases’ will be instrumental for use in not only the domestic agrichemical, industrial and maritime sectors, but also for international export.”