The Icelandic company, CarbFix is collaborating with Danish shipping company Dan-Unity CO2 to develop special vessels which will transport captured carbon emissions that have been dissolved in water to a specially designed terminal in Iceland which will convert them into stone 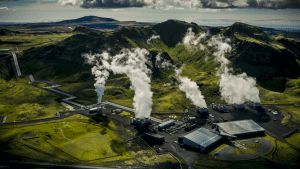 The Hellisheidi power plant in Iceland which is near the CarbFix pilot injection site, Credit: Carbfix Iceland ohf. website

An academic-industrial partnership based in Iceland, CarbFix has developed a novel approach to capturing and storing carbon emissions by capturing them in water and injecting them into subsurface basalts which converts them into stone. Once in the subsurface, the injected carbon dioxide reacts with the host rock forming stable carbonate minerals, thus providing for the safe, long-term storage of the captured gas.

CarbFix has collaborated with Danish shipping company Dan-Unity CO2 to transport carbon emissions diluted in water to a special terminal for their eventual conversion into stone. Known as the Coda Terminal, it is a hub for CO2 transport and mineral storage in south-west Iceland: the first of its kind in the world. Dan-Unity CO2 will design specifically equipped ships that run on sustainable fuel which will transport the carbon emissions to Iceland and permanently store them in the form of solid carbonate minerals via Carbfix’s technology. The Coda Terminal will accommodate emissions from local industrial emitters and those captured from the atmosphere using direct air capture technology in Iceland.

The onshore infrastructure needed for the Coda Terminal are temporary storage tanks, pipelines and injection wells that will be built in steps from 2021 to 2030. The site and surrounding areas are planned as industrial sites in the general planning of the area. An industrial harbour is already in place in Straumsvík and is equipped to receive large carriers. At full scale, the Coda Terminal will have the capacity to annually inject about 3 million tonnes of carbon emissions for permanent mineral storage.