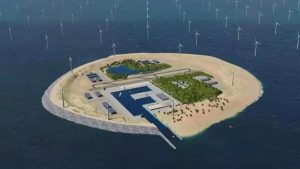 The Danish government has announced plans to build the world’s first energy island in the North Sea with a capacity of up to 10GW in renewable energy. Early estimates indicate that the cost of building the artificial island will be a little over €28 billion. The island will be developed in partnership with Denmark’s Ministry of Climate, Energy and Utilities and private players. The Danish government will hold a majority stake in the project.

The island is expected to be constructed 80 kilometers off the coast of Jutland, a large peninsula on the Danish mainland. The first phase of development will target the installation of 200 wind turbines, expected to generate up to 3GW of electricity. Electricity will be distributed among Denmark’s neighbors via the grid. Once the island achieves its maximum capacity of 10GW, Danish authorities are confident that the energy generated will be sufficient to power 10 million homes in Europe. To accommodate the enormous number of turbines required in the final phase, the island is expected to occupy 120,000-460,000 square meters. Construction is expected to be completed by 2030.

Denmark has begun inviting potential investors in the private sector for discussions. The government is hopeful that it will be able to attract significant interest and support from private players, on whom it is dependent to provide the project with innovation, cost-effectiveness, flexibility and commercial development. Given the project’s massive scale and Denmark’s reputation as a wind energy giant, the Danish government is optimistic of success. Dan Jørgensen, the Danish Minister for Climate, said: “This decision marks the start of a new era of sustainable energy production in Denmark and the world and it links very ambitious climate goals with growth and green jobs. The energy hub in the North Sea will be the largest construction project in Danish history. It will make a big contribution to the realization of the enormous potential for European offshore wind.”