On 8 March 2022, the EU announced that by the end of the year, it intended to reduce its reliance on Russian gas imports by almost two-thirds and by 2030, to stop importing all fossil fuels from the country. This decision was taken close on the heels of Russia’s invasion of Ukraine on February 24.

The EU’s decision in practical terms is quite radical. Currently, Europe is one of Russia’s biggest energy importers. According to the International Energy Agency (IEA), the EU imports close to 45% of its natural gas requirement from Russia. The year before that, the 27-member bloc imported close to 25% of its oil requirements from Russia.

One of the measures proposed to boost the EU’s energy security is diversifying Europe’s energy imports. Today, the countries in western Europe that have access to LNG import terminals and liquid gas markets are far more resilient to possible supply interruptions than those that are dependent on a single gas supplier. The global LNG market is undergoing a dynamic development with the entrance of new suppliers such as the US, Australia and Qatar.

Qatar is currently the world’s largest supplier of LNG, at around 100 bcm. Other large (>20 bcm) suppliers include Nigeria, Malaysia, Indonesia and Australia. However, global liquefaction is set to increase dramatically as new plants come on stream over the next few years. 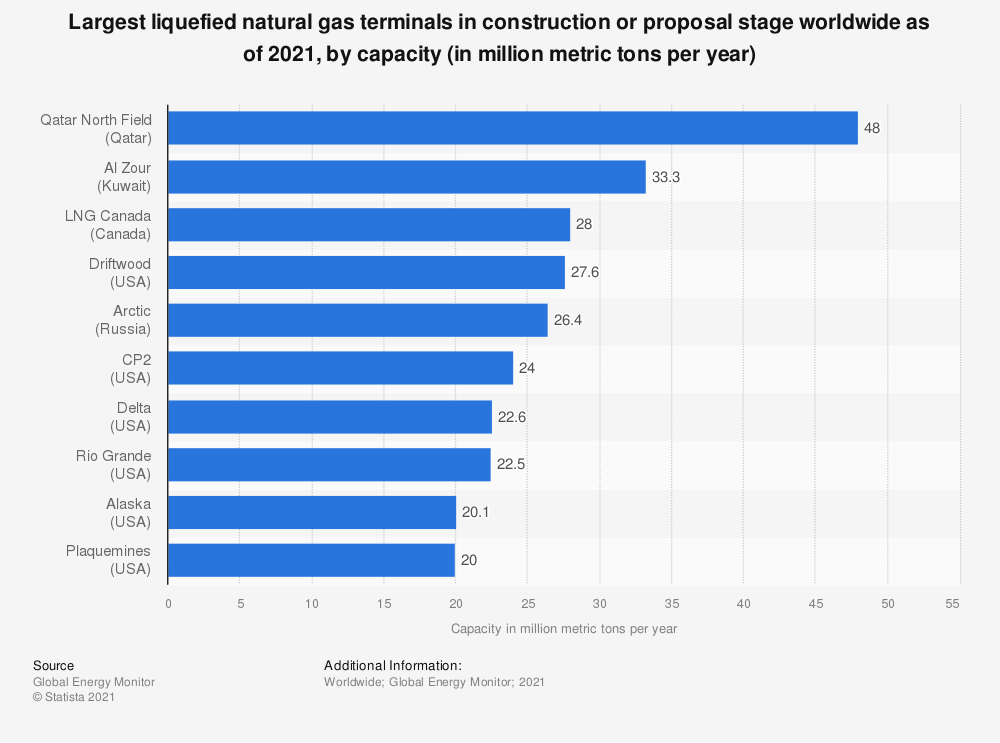 In March 2022, the EU and the USA announced the formation of a joint task force to bolster energy security for Ukraine and the EU for next winter and the following one. The primary goals of the task force will be to diversify LNG supplies in alignment with climate objectives and reduce demand for natural gas. The initiative will likely require new facilities in Europe for importing LNG.

President Joe Biden also announced a landmark decision to work with international partners to provide an additional 15 billion cm of LNG to Europe in 2022. The White House also confirmed that going forward, additional volumes of LNG imports to the EU would increase. Data show that in 2021, LNG exports to the EU recorded the highest volume (reaching more than 22 billion cm) with an estimated value of €12 billion. By early 2022, the EU had imported more than 60 billion cm from the US since April 2016.

The EU has also been strengthening relations with Nigeria, the fourth biggest LNG supplier to Europe, which exports close to 40% of its gas to the continent. Nigerian authorities say the country has a proven natural gas reserve of 209.5 trillion cubic feet as of January 2022.

Meanwhile, Germany has been lobbying with Qatar as a potential replacement for the Russian gas it currently imports. In March 2022, Robert Habeck, Germany’s Economy Minister said it had sealed a long-term agreement with Qatar for the supply of LNG but did not elaborate on the terms. The ministry said individual German energy companies would have to take initiative to sign deals with the Arab state’s enterprises.

Germany has also committed to “fast track” the construction of two LNG terminals as part of this new long-term deal. Already one of the world’s top three LNG exporters, Qatar plans to increase production by 50% by 2027. 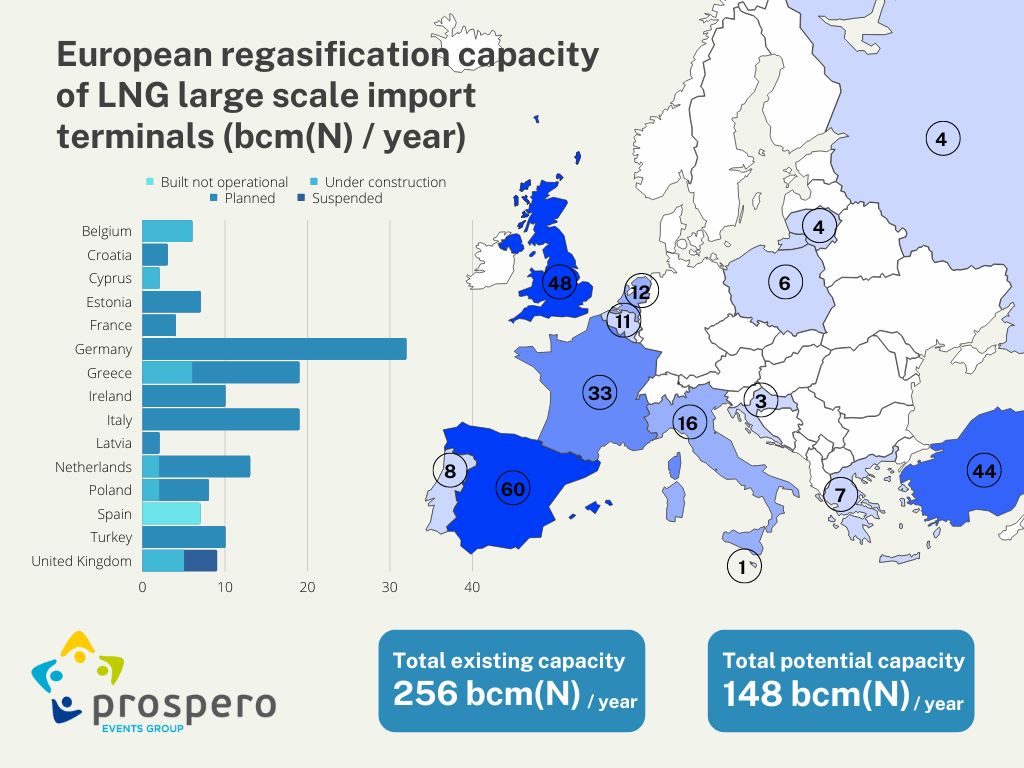 To ship gas across long distances, importing countries require terminals for the liquefaction and regasification process, which usually take around five years to build. Germany, Italy, Estonia, Finland, Latvia, Poland, the Netherlands, France, and Greece have all planned to build LNG terminals in the upcoming decade.

The fourth proposed terminal is the Rostock LNG project at the Baltic Sea port in Rostock.

The Wilhelmshaven LNG terminal is proposed to be developed at the Jade Weser Port near Wilhelmshaven, along the North Sea coast of Lower-Saxony, Germany. Utilising floating storage and regasification unit (FSRU), the LNG terminal will have the capacity to import ten billion cm of natural gas a year. German energy company Uniper will build the terminal which could be operational by 2026. Japanese ship owner Mitsui O.S.K Line will own, finance, and operate the FSRU, estimated to cost up to €675.8 million.

The German government will co-fund a regasification facility Brunsbüttel with a capacity of 8 billion cm by buying a 50% stake in the project via the Kreditanstalt für Wiederaufbau, a German state-owned investment and development bank. The regional government aims to change regulation to speed up the construction process – the terminal could be operational by 2026. Gasunie (100% owned by the Netherlands) and RWE signed an MoU in March 2022 to build the terminal. Gasunie will operate the facility.

US chemicals company Dow announced in April 2022 that it is taking a minority stake in the Hanseatic Energy Hub (HEH) project in Stade. The HEH consortium plans to build, own and operate an import terminal on Dow’s industrial park. The LNG terminal could be operational by 2026.

The German government has also instructed utilities RWE and Uniper to rent three FSRUs from the Greek company Dynagas and the Norwegian subsidiary of Hoegh.

In April 2022, the governments of Finland and Estonia agreed to jointly lease an FSRU. Finnish gas transmission operator Gasgrid Finland and its Estonian counterpart Elering will assess and negotiate the terms for leasing an FSRU. Estonia has decided to cease imports of Russian gas by the end of 2022 and is planning to build an LNG storage facility in Paldiski on the north coast, with a floating terminal operating there by the autumn of 2022.

The Italian government recently mandated the gas company, Snam, to negotiate the acquisition of one FSRU and lease a second.

The French government has tasked Total Energies and a subsidiary of Engie with installing a floating terminal in the harbour of Le Havré.

Altogether, this means additional demand for at least eight floating LNG terminals across Europe. Floating terminals come at a lower initial cost than comparable onshore terminals. Analysts say that the cost of a new FSRU could typically represent only 50-60% of an onshore terminal. A big advantage is that they are flexible and can be sold or transported elsewhere after use.

Before the Ukraine war, the Greek company Hellas Motor Oil launched construction of the Dioriga FSRU terminal, which is due to be completed at the end of 2023 to serve the Hellenic and Southeast Europe markets.

Latvia’s Prime Minister Krišjānis Kariņš confirmed in April 2022 that the government has agreed to begin work on a new onshore LNG terminal. The Latvian LNG terminal will be the third in the Baltic region, after Klaipėda LNG in Lithuania and Paldiski LNG in Estonia. The government has confirmed interest from six companies to build and operate the terminal, which is expected to commence operations in 2023-2024. The terminal will ship LNG via a pipeline to the Inčukalns underground gas storage facility, saving on the expensive cost of storing LNG at a terminal.

The Baltic Pipe is a gas pipeline project that will provide Denmark and Poland with direct access to Norway’s gas fields. The project is organised as collaboration between Danish energy company, Energinet and the Polish gas transmission system operator GazSystem. Baltic Pipe will include expansion of the Polish and Danish gas infrastructure and will begin gas transmission services by October 2022.

The new pipeline will expand the gas transmission capacity by up to 10 billion cm of gas per year. The EU has included Baltic Pipe on its list of key infrastructure projects that are of common interest to Europe. The total cost estimate for Baltic Pipe is €1.6 to 2 billion. The costs will be split equally between Energinet and GazSystem.