The European Hydrogen Backbone – A 2022 Snapshot

The European Hydrogen Backbone (EHB) initiative is a group of European energy infrastructure operators which initially published a vision paper for a dedicated hydrogen pipeline infrastructure, with maps covering nine EU Member States including Switzerland, home to the 11 Transmission System Operators (TSOs) participating at that time. Since then, the EHB initiative has grown to 31 European network operators with infrastructure covering 25 EU Member States including Norway, the United Kingdom, and Switzerland.

The European Commission’s REPowerEU plan aims to reach an additional 15 Mt of hydrogen in addition to 5.6 Mt foreseen under Fit for 55. Previous EHB analysis has shown that a hydrogen pipeline can transport close to 65 TWh of hydrogen/year. For perspective, this means that transporting half of the REPowerEU target of 10 Mt would require approximately five large-scale pipeline corridors. Based on an initial analysis of supply potential, demand centres, and TSOs’ assessments of the ability to repurpose existing natural gas and build new hydrogen pipelines, these five supply corridors could emerge by 2030. 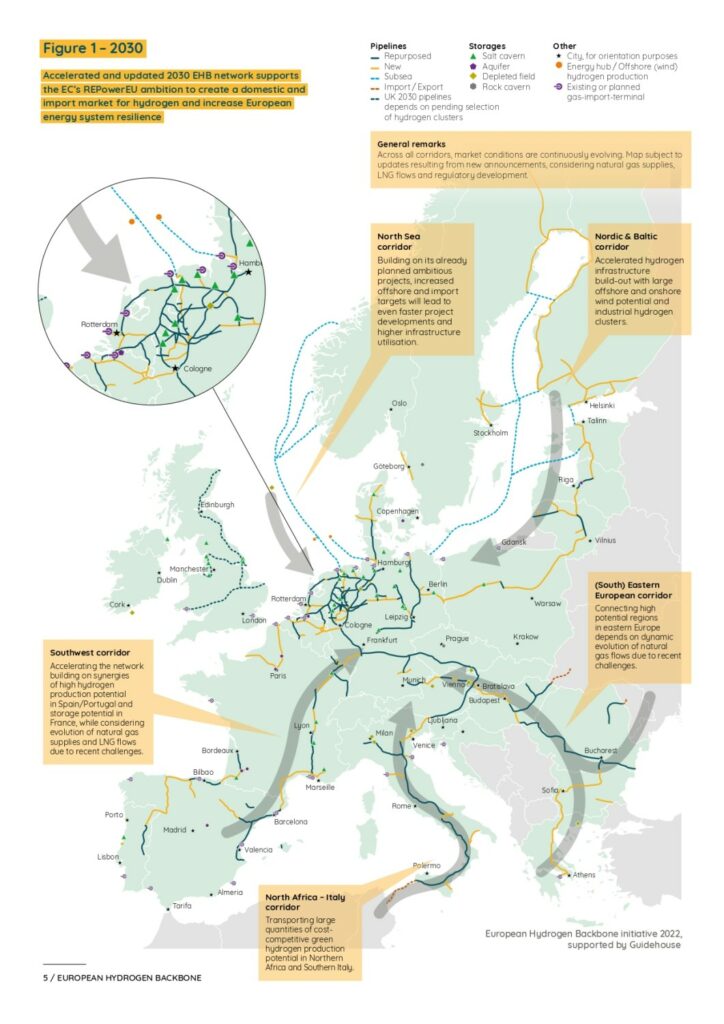 Austria’s current transmission gas network is operated by two TSOs, TAG and GCA and stretches over 1,700 km. In the future, both TSOs expect to transport hydrogen, either blended with methane or in pure form.

Fluxys Belgium is the owner and operator of gas transmission, storage and LNG regasification facilities in Belgium. The network consists of 4,000 km of pipelines and 18 interconnection points with neighbouring countries and import facilities. Fluxys has taken steps with Belgian industrial players and policymakers to identify the potential for hydrogen production, consumption, and the infrastructure needed. 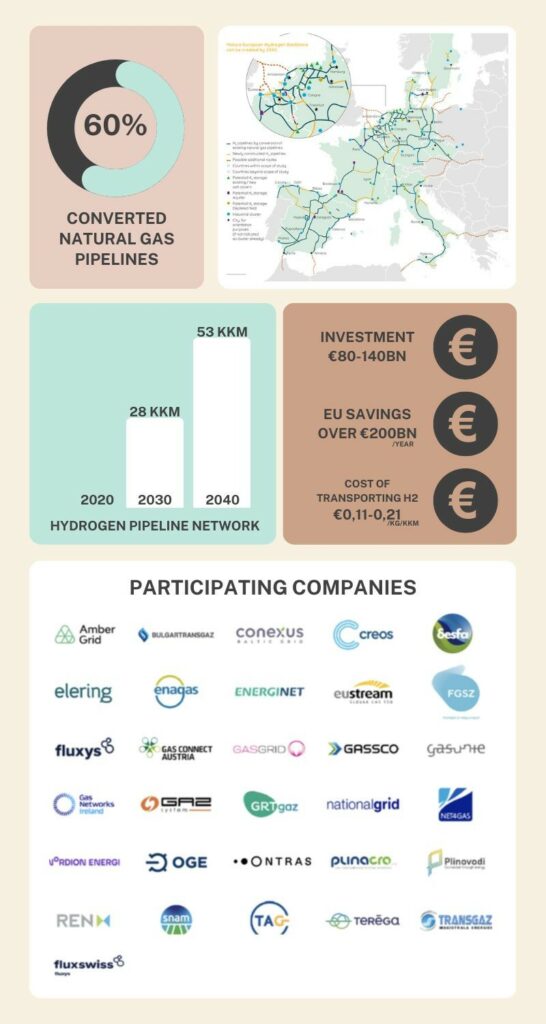 The Czech Republic’s gas TSO, NET4GAS, operates around 4,000 km of pipelines consisting of three major branches which connect Germany, Slovakia and Poland, while also covering domestic demand. NET4GAS expects to transport hydrogen in the future. Due to its geographical position, NET4GAS will remain an important transit TSO as it can transport the hydrogen from an Eastern direction, Southern direction as well as from the North-West.

In 2021, the Czech Republic published its own hydrogen strategy. To meet domestic hydrogen demand, it will need to import hydrogen from abroad by repurposed pipelines. There are several long-term gas transmission contracts in place. Major contracts expire at the beginning of 2035 and in 2039. The possibility of hydrogen transportation from the Eastern border with Slovakia to the Western border with Germany would (under circumstances still to be analysed) allow for initial hydrogen imports from Ukraine and North Africa by the early 2030s by connecting major non-EU supply sources and regions with demand centres in the EU.

In December 2021 the Danish government published its Power-to-X (PtX) strategy with a target of 4-6 GW electrolysis by 2030. The government intends to examine regulatory barriers to the development of a hydrogen market and to support the export of hydrogen and PtX products by creating the framework for a hydrogen infrastructure that can eventually be linked to the common European hydrogen infrastructure. Denmark’s electricity and gas TSO, Energinet, owns and operates a gas transmission pipeline grid of around 925 km. An expansion with the Baltic Pipe connecting Norway, Denmark with Poland will be in operation from 2022, expanding the pipeline grid to approximately 1,250 km.

The 2030 hydrogen infrastructure aims to have a total length of approximately 28,000 km of pipelines

Energinet has begun evaluating a 93-kilometre stretch of infrastructure eligible for repurposing to hydrogen transport, subject to successful completion of the requalification and material testing program.

Finland’s TSO Gasgrid Finland owns and operates a network of 1,300 km and a subsea interconnector into Estonia with Estonian TSO Elering. As a large part of the supply and demand is expected to develop in regions where there is no existing gas transmission infrastructure, the hydrogen infrastructure is envisioned to be based on newly built pipelines. Therefore, Gasgrid Finland and Nordion Energi (Swedish gas TSO) have started to develop a large-scale greenfield cross-border hydrogen infrastructure (Nordic Hydrogen Route) in the Bothnian Bay with the target of being operational by 2030.

France’s current gas network is operated by GRTgaz which operates 32,000 km of pipelines and Teréga, which operates a 5,000 km network in the South-West. GRTgaz has ongoing hydrogen projects such as mosaHYc, Jupiter 1000, Rhyne, Hynframed while Teréga is involved in trials around hydrogen storage as HyGéo project and studying industrial applications in the Lacq region cluster (Lacq Hydrogen project), building on synergies with the cost-competitive renewable hydrogen produced in Spain and locally produced hydrogen.

ONTRAS operates Germany’s second-largest gas transmission system, with approximately 7,700 km of pipelines and about 450 interconnection points. In the Bad Lauchstädt Energy Park real laboratory, they will be converting approx. 20 km of natural gas pipeline to pure hydrogen by 2024. With their IPCEI projects, they are driving forward the development of a hydrogen economy in Eastern Germany. As part of the network development plan (NDP) 2020-2030, the German TSOs have published initial plans for a national hydrogen network in 2030 based on a market survey in 2019.

Greece’s TSO DESFA operates a relatively new network of 1,456 km. There is a current hydrogen production capacity of 150,000 tonnes/year. The three main industrial clusters in Athens, Corinth and Thessaloniki are sources of large amounts of hydrogen. This potential stems from the expected deployment of large-scale PV plants, including local hydrogen usage and its transportation through the hydrogen-ready pipeline DESFA is deploying in the region.

By 2035, Hungary could already have a mature (mostly repurposed) hydrogen network with seven interconnections to Ukraine, Austria, Slovakia, Serbia, Romania, Croatia and a new one with Slovenia. This would connect all of Hungary’s neighbouring countries and nations in south-eastern Europe to Ukrainian hydrogen, effectively making Hungary a green hydrogen transit country.

In 2021, gas TSOs of Estonia, Finland, Latvia, and Lithuania began a research and development study of technical capabilities for injection and transportation of hydrogen in the gas grid. The study is expected to be finished in 2024 and the results will be used to decide on further hydrogen infrastructure development.

In the Netherlands, infrastructure company Gasunie received a formal mandate from the Ministry of Economic Affairs and Climate Policy to develop a national hydrogen transport network: the Dutch Hydrogen Backbone. The accompanying Hyway27 study showed that this network will consist of mostly repurposed existing gas pipelines. This backbone could be in place as early as 2027.

Poland has recently published its Hydrogen Strategy which indicates the need to build a hydrogen highway. Poland is the third European country in terms of current hydrogen demand (1 million tons), mainly located in the industry in the South plus industrial clusters across the country.

EUSTREAM’s transmission system in Slovakia represents an important east-west and north-south energy connection. To connect future markets with production centres, EUSTREAM plans to dedicate one or more of its main transit pipelines to transport hydrogen exclusively.

Enagás operates an extensive gas transmission network in Spain that comprises over 11,000 km of gas pipelines. The Spanish Hydrogen Roadmap foresees the country’s hydrogen pipeline network coexisting with natural gas and hydrogen for a defined period, optimising the use of current infrastructure to serve potential demand in industry and guaranteeing the security of supply.

Sweden’s Nordion Energi with Gasgrid Finland has started to develop a greenfield cross-border hydrogen infrastructure in the region of Bothnian Bay with the target of being operational by 2030.

The 2030 hydrogen infrastructure map would consist of a total length of approximately 28,000 km. Connecting these abundant supply regions to hydrogen consumers in the centre of Europe through cross-border pipeline corridors will become increasingly important as the adoption of hydrogen in the transport, industry, and power sectors accelerate and lead to demand outgrowing supply in regions with modest renewable energy production potential. The developments also pave the way for hydrogen pipeline imports from North Africa through Spain or Italy, from Ukraine through Poland, Slovakia or Hungary, or ship imports of hydrogen derivatives via planned new or repurposed import terminals.

At Hydrogen Transportation & Distribution 2022 | Virtual Conference, we are bringing together the top experts and decision-makers responsible for the transportation and distribution of Hydrogen in Europe. Join us for in-depth discussions on the long-term strategies for H2 transmission & distribution, infrastructure requirements, injection of H2 into natural gas pipelines and much more.

Our Hydrogen Series of events brings to you insights from top experts and decision-makers responsible for Green and Blue Hydrogen production, electrolysis, Power-to-X, Hydrogen transmission and distribution strategies and infrastructure.