The G-7 is working on an agreement on the extension of its sanctions against Russia. G7 is a coalition made up of Germany, France, the United Kingdom, the United States, Japan, Canada and Italy by looking for a mechanism to cap the purchase price of Russian oil. 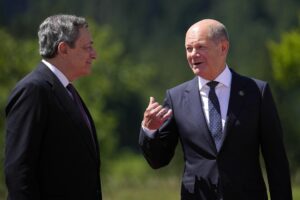 The G-7 coalition comprising of Germany, France, the UK and USA, Japan, Canada and Italy is working toward an agreement on expanding its sanctions against Russia by looking for a mechanism to cap the purchase price of Russian oil.

The move, under discussion at the three-day G-7 summit in the Bavarian Alps that began on 19 June, will come as the EU moves to ban purchases of Russian gold. The countries believe that oil is the most lucrative Russian export while gold makes up a significant part of the revenues that fund Russia’s war against Ukraine.

The details of the oil purchase price cap (which will create a buyers’ cartel of Western nations and their allies and the gold import) were being finalized ahead of the summit’s conclusion on 28 June.

A goal in the talks was to keep Russian oil available on global markets to buyers such as India and China, which could help stabilize prices already trending at roughly double prepandemic levels, while constructing a mechanism that Western countries could use to restrict Russian revenues from the sales.

Italian Prime Minister Mario Draghi told the meeting that the price cap would be effective against Russia because it would cut financial flows to Moscow while reducing inflation, which has surged across the West, partly driven by energy prices.

Germany and other EU countries that are heavily dependent on Russian gas have so far been opposing a cap or embargo on gas purchases, as their governments scramble to secure alternative sources of supply.

Charles Michel, president of the European Council, which represents EU national governments, confirmed that the proposal was being discussed but said it needed the agreement of all 27 EU members for the bloc to adopt it. “We want to make sure that, like I said just before, the goal is to target Russia and not to make our life more difficult and more complex,” he said.

The oil cap will need to be harmonized with the existing sanctions regimes of the USA, the EU, Britain and Japan, said a senior official from Germany, which currently chairs the G-7 and hosted this summit. The EU agreed to ban almost all imports of Russian crude by December, and refined oil products by February.