After piloting cement manufacture integrated with carbon capture and storage technology in its plant in Brevik, Norway, HeidelbergCement will now do the same at its cement plant in Slite, Sweden. The CCS facility will capture all carbon emissions generated at Slite, making it the first instance of carbon-neutral cement manufacture in the world 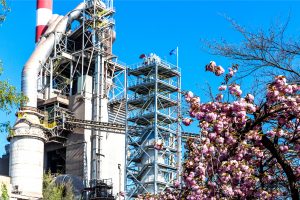 This year, HeidelbergCement will integrate a carbon capture and storage facility at its cement plant in Slite, Sweden. The CCS facility will allow it to capture approximately 1.8 million tonnes of carbon dioxide each year. This capacity is enough to absorb the plant’s entire emissions, making it the first factory to produce cement while emitting net zero emissions. In addition to employing CCS technology, HeidelbergCement also plans to increase its use of fuels made with biomass. While the CCS facility at HeidelbergCement AG’s factory at Brevik is expected to be operational by 2024, the new one at Slite will be ready for deployment in 2030.

Around the world, cement manufacturers are struggling to develop strategies that will limit the emissions generated in the manufacture of cement. This is because carbon dioxide is released during pivotal points in cement manufacture, such as when fossil fuels are used to heat kilns, or when limestone undergoes calcification. It is also one of the highest polluting industries in the world, and has been under considerable pressure from the EU (i.e. the Paris Agreement) to undergo serious transformation. In order for countries to reach the goals agreed upon in the Agreement, academicians and financial analysts have stated that the cement industry that needs to ramp up its adoption of CCS technology at the earliest.

Earlier this year, Mexican cement giant CEMEX announced an investment of €33 million to run one of its British plants on hydrogen. Franco-Swiss materials company LafargeHolcim has been using alternative fuels to heat its kilns and exploring the use of recycled materials to produce green cement. According to financial analysts, the cement industry will be severely impacted from 2030 onwards since on one hand, they operate on exceedingly low profit margins and on the other hand, they will have to deal with high decarbonisation costs as most countries have committed to achieve net-zero carbon emissions by 2050.