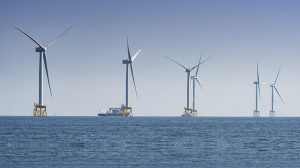 Iberdrola has announced its plan to develop an offshore mega-wind farm off the Spanish coast with a planned capacity of up to 300GW. It has spent over €1 billion on research, innovation and development of the project plan, which it has submitted to the Next Generation EU Programme. The Programme is an initiative of the EU to support new ventures in the fields of heat electrification, floating offshore, sustainable mobility, green hydrogen, innovative renewables, smart grids, circular economy and energy storage. If Iberdrola emerges as one of the winners (the Programme has received 150 initiatives so far), it will bring forth investments of up to €21 billion and mobilize partnerships with hundreds of enterprises.

Pending its progress with the Next Generation EU Programme, Iberdrola has announced that it is ready to begin the preliminary research, design and engineering work required to develop the mega-wind farm as early as this year. In addition to almost 2,000 jobs from 2021-22 before construction begins, the project is expected to provide the Spanish economy with almost 3,000 jobs each year until it is ready for operations in 2026. Iberdrola expects that the development and operations of the wind farm will need the collaborative efforts of 66 energy companies, technology centres and 52 small and medium enterprises. The wind farm’s vast scale of operations will enable Spain to cut down emissions by 202,500 tonnes every year. The project has been designed keeping the Spanish government’s Recovery, Transformation and Resilience Plan in mind.

Iberdrola is a veritable wind energy giant in both the Spanish and global markets.  The company is hopeful that once they secure a green signal for this wind farm, it will push out other offshore projects. The company has identified sites offering a combined capacity of up to 2000MW around the Galicia, Andalusia and Canary Island coasts. Currently, Iberdrola operates offshore wind farms in the coasts of as Germany, the UK, Ireland, America and France. It has also won development contracts in newer markets such as Denmark, Japan, Poland and Sweden. Currently, Iberdrola’s global projects offer a combined capacity of more than 30GW.