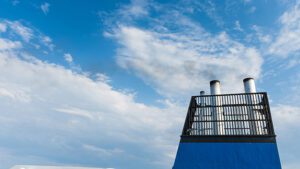 Japan’s National Maritime Research Institute (NMRI) successfully demonstrated the feasibility of capturing carbon for permanent storage aboard a shipping vessel during live operations. Scientists had been able to show the potential of directly removing carbon generated by a ship’s exhaust system. But these tests were based on simulations generated in NMRI’s laboratory. NMRI worked with Alfa Laval, a Swedish industrial manufacturer to construct a scrubber (a kind of shipping vessel) which was specially designed to include a CCS facility onboard.

Alfa Laval is the company that designed PureSOx, a shipping vessel that removes sulphur oxide from marine exhaust gases. It is also a member of the Getting to Zero Coalition and a Strategic Corporate Partner in Maersk McKinney Møller Center for Zero Carbon Shipping.

The project was conceptualised to reduce the carbon footprint of the shipping industry until carbon-neutral fuels become viable enough for widespread use. Its successful demonstration will help boost the potential of CCS as a viable solution for an industry that is otherwise known for its notoriously high resistance to decarbonisation. The shipping industry is, however a long way from complete decarbonisation. To achieve that, the industry needs to innovate on a wide range of carbon-neutral fuels and other sustainable technologies.

René Diks, Head of Exhaust Gas Cleaning Systems at Alfa Laval said: “The positive results from our project with NMRI Japan show that scrubber technology could also play a role in removing carbon at sea. Both short-term and long-term solutions will be needed to achieve IMO Greenhouse gas emission reduction targets. Much development is needed before CCS can be deployed at sea, but this preliminary testing showed clear potential in the approach. Though designed to remove SOx, PureSOx demonstrated its ability to remove CO2 while operating in a closed loop.”