Lithuania has opened a gas pipeline to Poland to offset some of the shortfall caused by Russia’s decision to cut off its supply to Warsaw, local media in the country reported Monday. 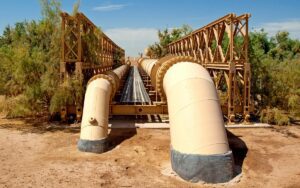 Lithuania has opened a gas pipeline to Poland to offset some of the shortfall caused by Russia’s decision to cut off its supply to Warsaw, local media in the country reported Monday.

Reports by the public service broadcaster website lrt.lv and on delfi.lt said that a pipeline, built by the Lithuanian gas network operator Amber Grid, has started pumping gas to Poland Sunday afternoon.

The Gas Interconnection Poland-Lithuania (GIPL) pipeline was completed earlier this year, and stretches 508 kilometres from Jauniūnai, a town in Lithuania to its interconnection with the Polish gas network in Hołowczyce, Poland.

“This is a milestone in the history of the development of energy independence between Lithuania and Poland, especially in the context of security of gas supply,” local media quoted Nemunas Biknius, CEO of Amber Grid as saying on Sunday, when the first gas was pumped through the pipeline.

The pipeline will supply Poland with two billion cubic metres of gas per year, covering 10% of Poland’s yearly demand, and will reach its full capacity in October 2022.

The GIPL will be officially opened at a ceremony on May 5 to be attended by the Lithuanian, Polish and Latvian presidents, the EU energy commissioner and Baltic and Polish ministers.

The pipeline has been under planning and construction since October 2015, when Lithuania, Poland and the European Commission signed the GIPL financing agreement.

While the pipeline will meet only part of Poland’s need for gas, it will connect to the Conexus Baltic Grid gas network and storage facility which expects to supply all of Latvia, Lithuania and Estonia’s needs for gas from LNG delivered to Klaipėda and later to a planned joint Estonian-Finnish floating LNG terminal in Paldiski, Estonia.

Latvia has also announced its intention to build an onshore LNG terminal and pipeline to Conexus underground gas storage facility in the town of Inčukalns. All three Baltic countries have said they have stopped buying gas from Russia.

Plans to end reliance on Russian natural gas in the Baltics were sped up by Russia’s invasion of Ukraine and threats to use the supply of gas as a weapon in retaliation for Western sanctions against Russia.

Stay updated with our conference here