Called ‘H2RES’, the facility will be powered by 2 turbines of 3.6 MW and has the capacity to produce 1,000 kg of green hydrogen every day 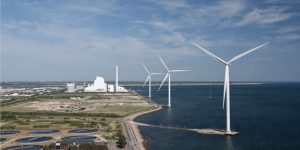 Ørsted has announced the commencement of a project to produce green hydrogen by powering an electrolyser with energy from wind turbines. Dubbed ‘H2RES’, the project will be powered by two wind turbines of 3.6MW each and will have the capacity to produce up to 1,000 kg of green hydrogen per day. The project will be situated in south Copenhagen in Ørsted’s Avedøre Power Station. The hydrogen produced is slated to be used as fuel for road transportation in Greater Copenhagen.

Given the instability of wind energy, Ørsted said it would simultaneously assess the feasibility of combining an electrolyser with offshore wind supply. Anders Nordstrøm, the Vice President and head of Ørsted’s hydrogen activities, said: “H2RES is an example of how public co-funding coupled with a committed hydrogen industry and ambitious off-takers can drive the decarbonisation of the transport sector. H2RES is a small but important step towards large-scale renewable hydrogen production, and it will allow us to demonstrate how offshore wind combined with onshore electrolysis can offer decarbonisation beyond direct electrification.”

Green hydrogen production has attracted attention from energy manufacturers around the world. Ørsted and Siemens Gamesa joined hands last year to develop an offshore green hydrogen facility, also powered by wind energy. Just recently, thyssenkrup’s Uhde Chlorine Engineers’ Green Hydrogen product division won a contract to build and install an 88MW hydrogen facility for Hydro-Québec where electrolysis will be powered by hydropower. ENGIE and Total have also announced a recent collaboration to produce green hydrogen using solar energy. Late last year, Ørsted had announced a collaboration with BP to develop a large-scale renewable hydrogen facility from within a refinery in north-west Germany. BP stated that its Lingen Refinery would house the 50MW electrolyser which has an expected capacity of producing almost 9,000 mtpa of hydrogen.

Ørsted and its partners were awarded funding for this green hydrogen project from a scheme run by the Danish Energy Agency called the Energy Technology Development and Demonstration Programme. Released in 2019, the funding came up to DKK 34.6m. H2RES is expected to generate its first batch of green hydrogen towards the end of this year.