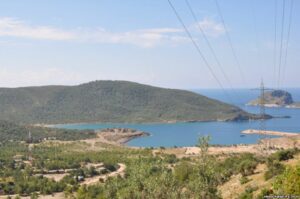 Russian state-owned company Rosatom is transferring billions to a subsidiary building the €19.5 billion Turkish nuclear power plant in the Mediterranean city. The company sent around €4.8 billion last week to the builder, Akkuyu Nuclear JSC, while similar amounts are earmarked for this week and the next, according to a Bloomberg report Friday, which cited senior Turkish officials with knowledge of the matter.

The construction site in the Mersin province is the largest of its kind around the globe, but Rosatom said in a statement that “the current transactions are significantly lower” than the figure provided by the Turkish officials. The company, however, declined to comment further, saying the financing agreements for the project are private.

An Anadolu Agency (AA) report later confirmed the transfer of €4.8 billion, which it said came after Treasury and Finance Minister Nureddin Nebati’s meeting with the Russian side. The project has received financing from Russia’s biggest lender, Sberbank and Sovcombank, both under Western sanctions due to the Kremlin’s invasion of Ukraine. The Turkish officials who spoke to Bloomberg said financing is to cover all procurement needs for the Akkuyu plant over the next two years.

The Akkuyu Nuclear Power Plant (NPP), the largest energy project implemented by Turkey and Russia, was unveiled in a groundbreaking ceremony attended by officials from both countries and is being constructed under a cooperation agreement signed in 2010.

The first unit of the plant, out of a total of four, is scheduled to become operational by mid-2023, a big step toward meeting Turkey’s ever-growing energy needs. The remaining three reactors are due to start operation by the end of 2026, at a rate of one per year, to ultimately have a total installed capacity of 4,800 megawatts (MW).

Once completed, the plant, which is expected to produce 35 billion kilowatt-hours (kWh) of electricity annually, will fulfill about 10% of domestic electricity needs, according to a previous statement by Energy and Natural Resources Minister Fatih Dönmez.

Akkuyu is the world’s first NPP project implemented through a build-own-operate model. Under the long-term contract, Rosatom has agreed to provide the power plant’s design, construction, maintenance, operation and decommissioning.