Given its ambitious climate target to reduce emissions by half by 2030, the Norwegian government has designated 2 areas in the North Sea exclusively for floating offshore wind development: Utsira Nord and Sørlige Nordsjø II 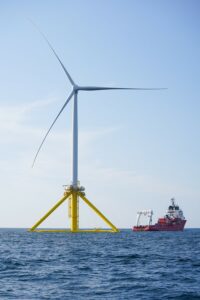 German energy firm RWE has signed a collaborative agreement with NTE and Havfram to participate in the Norwegian government’s tender process for floating offshore wind energy, which will begin later this year. Norway has ambitious climate targets: by 2030, the country aims to reduce its greenhouse gas emissions by 50 to 55% compared to 1990 levels, while promoting green growth.

The Norwegian Ministry of Petroleum and Energy has designated a new area for this purpose: Utsira Nord, located around 30 kilometres off the coast of Norway west of the island of Svendsholmen, which offers the opportunity to build up to 1.5 gigawatts (GW) of new floating offshore capacity.

Sven Utermöhlen, CEO Offshore Wind, RWE Renewables, said: “Utsira Nord is an excellent opportunity for us to develop a floating offshore wind project on an industrial scale with two strong Norwegian partners. In the field of floating offshore wind power, we are doing pioneering work at no less than three demonstration plants, including the TetraSpar Demonstrator which is being commissioned now at its site less than 20 kilometres from Utsira Nord. We will put the knowledge and experience we have gained in our pilot projects to work in Norway in the future.”

Odd Strømsnes, CEO of Havfram said: “The expansion of offshore wind is a crucial factor for a successful energy transition in Norway. With RWE and NTE, we strive to advance this transition, and aim to be a valuable addition to Norway’s marine energy sector.”

According to current findings, 80% of the marine areas potentially available for wind farms worldwide are suitable only for floating technology. For this reason, RWE is conducting in-depth research and development work for floating offshore wind technology. The company is currently investigating the potential of this innovative technology in three joint ventures in Norway, the US and Spain, and is thus in an ideal position to carry out further projects in the Norwegian North Sea.

Apart from Utsira Nord, the Norwegian Ministry of Petroleum and Energy has designated another area for offshore renewables: Sørlige Nordsjø II. RWE has already expressed interest in this area, which borders the Danish sector in the North Sea.