Deputy Prime Minister and Minister of Mining and Energy of Serbia, Zorana Mihajlović, has announced that the price of electricity for households will be increased but did not offer details. 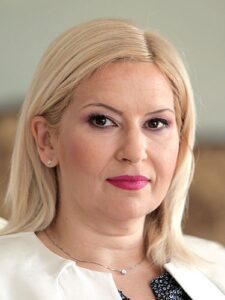 Deputy Prime Minister and Minister of Mining and Energy of Serbia, Zorana Mihajlović, has announced that the price of electricity for households will be increased but did not offer details.

Serbia has not increased the prices of electricity for households since the beginning of the energy crisis, nor did most other Southeastern European countries in which prices are regulated by the state, but elsewhere the hikes were as high as 100%. In countries where the market is liberalized, increases were inevitable, but governments introduced subsidies and froze prices in order to ease price growth.

Mihajlović said that Serbia has the cheapest electricity in Europe and lower prices even than the surrounding countries. Prices of coal and oil have risen in the past year, as did all items for electricity production and it is not realistic that Serbia would continue to have current prices, she stressed.

But the new price must be in line with all parameters and sustainable for state-owned power utility Elektroprivreda Srbije (EPS), the state and citizens. EPS, the most important company in the country, must overcome the crisis on its feet, not on its knees, said Mihajlović.

Mihajlović stressed that higher income from the price increase won’t be spent on salaries in EPS, but on solving the problems caused by the energy crisis and high prices on the market.

Of the countries with prices controlled by the government, Albania, Bosnia and Herzegovina, Montenegro and Serbia have kept their tariffs unchanged. North Macedonia increased prices by 9.5% on January 1, and in Kosovo, the increase reached 100% for households that consume more than 800kWh/month.

In countries with liberalized markets, governments have introduced direct and indirect subsidies, and decided to freeze power prices. Croatia has adopted a €637 million package for households and businesses, resulting in an increase of only 9.6%, while Slovenia has earmarked €203 million.

Romania and Bulgaria limited prices in November and December, respectively. Romania’s subsidies for all consumers reached €2.9 billion, while Greece spent about €4 billion for the same purposes.