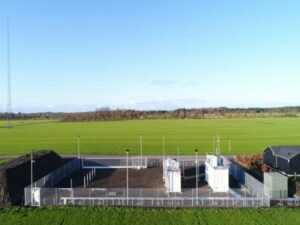 Siemens Gamesa and Siemens Energy have announced that they are joining forces to develop an innovative solution that fully integrates an electrolyzer into an offshore wind turbine as a single synchronized system to directly produce green hydrogen. The companies intend to provide a full-scale offshore demonstration of the solution by 2025-26. The German Federal Ministry of Education and Research has announced that the developments can be implemented as part of the ‘Hydrogen Republic of Germany’ competition.

Over a time frame of 5 years, Siemens Gamesa plans to invest €80 million and Siemens Energy is targeting to invest €40 million in the developments. Siemens Gamesa will adapt its development of the world’s most powerful turbine, the SG 14-222 DD offshore wind turbine to integrate an electrolysis system seamlessly into the turbine’s operations.

Andreas Nauen, Siemens Gamesa CEO, said: “The potential of wind-to-hydrogen means that we can decarbonise hard-to-abate industries too. It makes me very proud that our people are a part of shaping a greener future.”

Christian Bruch, CEO of Siemens Energy, said: “We can leverage highly flexible electrolyzer technology to redefine the future of sustainable offshore energy production. With these developments, the potential of regions with abundant offshore wind will become accessible for the hydrogen economy.”

The offshore wind-to-hydrogen solution will produce green hydrogen using an electrolyzer array located at the base of the offshore wind turbine tower, blazing a trail towards offshore hydrogen production. The solution will lower the cost of hydrogen by being able to run off-grid, opening up more and better wind sites. The companies’ developments will serve as a testbed for making large-scale, cost-efficient hydrogen production a reality and will prove the feasibility of reliable, effective implementation of wind turbines in systems for producing hydrogen from renewable energy.