Europe is seeing a natural gas price surge five times the average. The continent has historically depended on gas fuel – a fifth of its energy- especially during the winters when other sources of energy aren’t reliable. Yet, most of it comes from outside Europe, especially from Russia (via the Nord Stream). We have rounded the top importers in Europe and where they get their gas from. 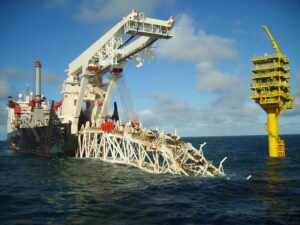 They receive the maximum import – 97%, mainly from Russia, which imports 55 billion cubic meters (bcm). Most of its natural gas comes from Russia through the Nord Stream pipeline and Yamal-Europe pipeline. The political tensions with Ukraine have led Russia to supply gas through sub-sea cables like the Nord Stream 1 (the world’s longest). 40% of Russia’s natural gas comes to the EU through this stream. Gazprom, Russia’s state monopoly exporter, controls all of it.

Italy’s gas infrastructure is robust, with some of the major pipelines from Africa and other European countries crisscrossing it. The average need for imports is at 93%. And they get most of the gas from long-term gas supply agreements signed with Russia’s Gazprom, Algeria’s Sonatrach, Norway’s Equinor, and the Libyan Mellitah Oil and Gas. It also has agreements with Qatar, which accounts for about 9% of Italy’s total Liquid natural gas (LNG) supply. 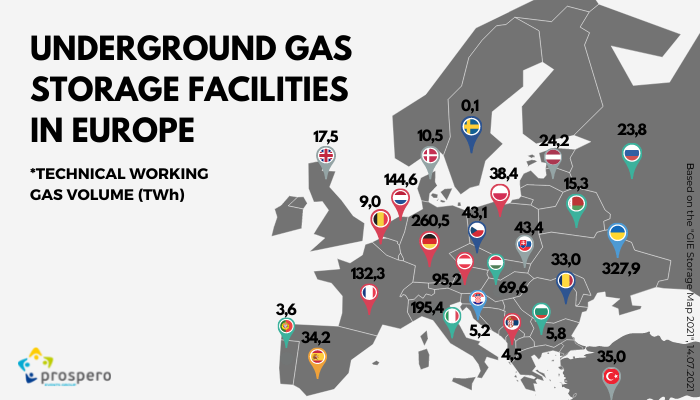 Britain used to be a top exporter of gas, but as its North Sea reserves dwindled, they started relying heavily on imports to meet half of the UK’s gas demands. Norway is Britain’s primary supplier of both crude oil and natural gas, with the UK importing 1.4 million metric tons of natural gas from Norway in 2020, followed by the US. LNG reaches British shores from Qatar and China is part of the picture as well. Russia supplies comparatively less natural gas (5%) to the UK than the rest of Europe.

The Turks are seeing a 15.2% uptake on natural gas import, year-on-year. Other than the TurkStream pipeline that supplies natural gas from Russia (1.86 bcm), they rely on the U.S. (838 mcm) and Azerbaijan (762 mcm). There is a 105.5% increase in LNG imports through pipelines from Algeria and Nigeria as well. And Ankara is all set to renew contracts with larger imports from Russia’s Gazprom and Nigeria LNG to continue meeting its import needs. 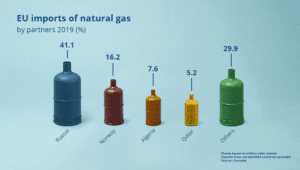 France imported 25.8 billion cubic meters of natural gas through pipelines, depending on Norway and the Netherlands. The French, though, showed a 31% decrease compared to the previous year. They import nearly all their natural gas from Norway (31%), Russia (15%), Algeria (16%), and the Netherlands (18%). Currently, LNG accounts for 9% of its energy needs.

See our upcoming events for deep dive into the hottest topics in European Energy Industry.