The European Energy Crisis: How did we get here and where do we go from here?

In an economy that’s still in the recovery mode after the pandemic, the unprecedented energy price surge is set to become a hindrance to the green transition, affect household incomes and slow down the economic recovery. Europe is facing an energy crisis, and it is real.

According to the European Commission, wholesale electricity prices have increased by over 200% compared to 2019.

Natural gas, often seen in Europe as the fuel to help drive the transition away from highly polluting coal generation to cleaner renewables, has largely been responsible for the surge in energy prices. Europe’s increasing reliance on renewable energy has become its Achilles heel as well. Historically low wind speeds and cloud covers have hindered renewables production while demand soared as the economy recovered from the pandemic.

In September 2021 and October 2021 (till date) alone, 14 suppliers serving over 2 million customers have ceased operations in the UK. The biggest among the now-defunct suppliers are Avro, Pure Planet, People’s Energy, Green and Utility Point.

Bohemia energy, one of the biggest electricity and gas suppliers in the Czech Republic terminated its services with immediate effect on 13 October 2021. The company that used to serve around 900,000 customers cited on its website that the continuing surge of energy prices in the wholesale markets was the main reason for its decision to close its doors.

Crazy Energy prices in Europe: How did we get here?

Close to a quarter of electricity in Europe is generated from natural gas and about 40% of the natural gas used in Europe comes from Russia. 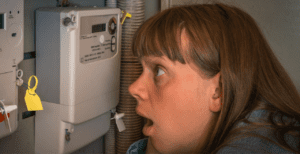 European countries normally replenish their supply of natural gas in summer; however, the reserves could not be replenished this summer. A cold winter and higher than normal summer temperatures, increased energy demand from industries as the world began to recover from the pandemic have all kept the energy demand high. Despite the higher demand, a lower-than-expected supply of natural gas from Russia has now led to an unprecedented surge in wholesale energy prices. At the same time, gas storage sites in Europe were at their lowest levels this year.

Gas prices were trading as high at 162 EURs per MWh in the first week of October, the figure was 20 EURs per MWh at the beginning of the year.

As winter approaches, the prices are expected to stay high through to the spring of 2022.

Some European states did turn to the LNG market to make up for the shortage. However, increased demand for LNG from China and Japan meant that competition and prices are high there too. According to a report from Wood Mackenzie, between January and July, LNG imports into Europe were 15% below the volume in 2020.

Nordstream2 and the Gas price surge

There is a widespread accusation that Russia is cutting natural gas supplies to Europe to speed up the approval of the controversial, newly completed Nord Stream 2 pipeline. Although Gazprom maintains that it is fulfilling its orders to Europe based on long-term orders, it is not increasing its supplies to Europe despite historically high demand and prices. The five-year transit contract entered between Russia and Ukraine in 2019 sets the volume of gas transit through Ukraine at 65 billion cubic meters in 2020, and to 40 billion cubic meters annually between 2021 and 2024. As supplies through Ukraine gets reduced and gas reservoirs in Europe run dry, Europe will have to make a choice between getting Nord Stream 2 to go live or facing a severe shortage of gas.

The “pay as you clear” mode ties the wholesale price of electricity to the last unit of energy bought via auctions in the member states. The “pay as you clear” mode has resulted in soaring gas prices setting the price of electricity even in countries such as France where more than 70% of the power is generated from nuclear. The EU energy market has been successful in keeping the energy prices low for years and has incentivized renewable energy projects by offering cheaper wind and solar power the same price paid for the most expensive power in the market. However, the recent surge in gas prices has resulted in all energy becoming expensive. An overhaul of the EU energy market would require consensus from member states and new legislation, which won’t happen overnight.

The rising carbon prices in recent years had made coal power generation uneconomical in Europe. However, the surging gas prices in recent months, have made coal a convenient choice. In Germany, lignite and hard coal together generated 35.1 terawatt-hours (TWh) of electricity in the third quarter. It was 28 TWh in the second quarter and 29.3 TWh in the third quarter of 2020. Procuring coal and generation well has not been easy this year, as coal prices have been at record highs due to higher demand in China, combined with record-high carbon prices in Europe. It would indeed be undoing the gains from the increased penetration of renewables in the European energy mix in recent years if this situation prompts more utilities to switch to coal.

The European Union has announced several short-term options for member countries to tackle the surging costs including income support, deferral of bill payments, tax reductions. France has promised a price ceiling and an offer of a one-time payment for poorer households. Italy is proposing tax cuts, while Spain, Greece and Italy have called for EU level measures such as coordinated gas purchases, gas storage and changes to the EU energy market system.

EU member states getting together for joint gas procurement and storage is one of the options. However, it could just be a temporary solution and only a few states have gas storage sites of sufficient capacity. Gazprom, the major supplier of gas to Europe is also one of the biggest players in underground gas reservoirs.

As much as renewables are great for the environment, they are unreliable sources of energy and has not been able to substitute coal, gas, or nuclear energy for baseload generation.

Investment in large utility-scale energy storage systems could help even out fluctuations in renewable generation. In addition to securing gas supplies in the long-term, European nations would have to decide whether they follow France’s road in investing further into nuclear energy even as more than 70% of its electricity comes from nuclear already. Germany, on the other hand, as it phases out its nuclear fleet has had to turn to coal for generation.

Will European countries embrace nuclear as a clean, reliable, and cost-effective source of energy?

All said winter is coming. And it looks like it will be long and cold. Hopefully, the lights and heating stay on.

Join us for in-depth dive into how the European energy market is tackling the price surge and the volatility at The 10th Electricity Price Forecasting and Market Arrangements Forum as we gather European experts to discuss the latest developments in the market.

Registration is open for the 11th Electricity Price Forecasting & Modelling conference, and I’d like to attend on behalf of [COMPANY’S NAME]. It’s a conference for carbon capture, utilisation and storage professionals and decision-makers in the energy sector who want to level up in their careers. It’s happening on June 15-16, 2023, in Berlin.
It’ll be an amazing opportunity for me to peer-to-peer networking in an exclusive group of experts to share their thoughts on the current CCUS status, its potential in the close future and practical strategy for the development and implementation of CCUS techniques in the energy sector.
Please have a look at the agenda and let me know if I have your approval to compensate for the cost of the delegate pass.
To ensure that this benefits the entire team, I’d like to share what I learned by giving a brief presentation to our team shortly after the event.

I would like to attend the 3rd Annual CCUS & Carbon Sinks a 2-day conference organised by Prospero Events Group for leading professionals and decision-makers in the Energy Sector to discuss the challenges and solutions of CCUS technologies development.

The event will feature carbon capture, utilisation and storage experts who will provide insights on the latest strategies and solutions to the biggest challenges based on their own experiences in the industry. There will also be networking opportunities that will allow attendees to connect with others in the industry.

This is a hybrid event that is possible to attend in person in Berlin or virtually. The delegate pass price includes access to all the sessions, peer-to-peer networking, and a post-conference documentation package. The format of the event allows you to join the discussion with your views and opinions, rather than being just a passive listener.

I believe attending the conference will enhance my professional knowledge. I can hear from speakers with expert insights and learn in an immersive environment.

Let me know what you think!

Hope you’re having a great week so far. I found an interesting event about CCUS and Carbon Sinks that I wanted to share with you. I thought it could be an excellent opportunity for my professional development.

On June 15-16th, Prospero Events Group is hosting their 2-day conference called “3rd Annual CCUS & Carbon Sinks” in Berlin. The agenda and speakers reflect that this will be a highly insightful event.

There will be top experts from leading energy companies in the speaker panel as Engie, CO2 Value Europe, Nordic Electrofuel, Lafarge, Southern Company and many more, along with networking opportunities and breakout sessions all centred around the latest solutions & developments in CCUS technologies. They will address topics such as future CCUS Deployment, Modularisation & its cost impact, Risk assessment, development of CO2 transport infrastructure and more.

Would [COMPANY’S NAME] be able to expense tickets to this event?

I strongly feel this forum would provide valuable takeaways on new CCUS technologies and strategies, which could positively impact our business.

I’d be happy to talk with you more about it!