The region is home to a steadily increasing number of offshore wind companies; the sector is expected to create 4,500 new jobs in 5 years 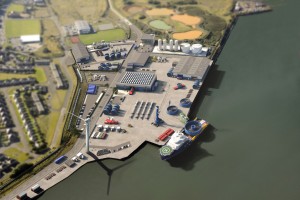 The Port of Blyth in the UK has recently announced the launch of enhanced facilities which will enable it to capitalise on the offshore wind energy market boom in the North-Eastern part of the country. Called the Bates Clean Energy Terminal, it will serve as a platform to provide a wide range of services to renewable energy companies and offshore wind manufacturers. It is hoped that the terminal also invites investment and innovation in low carbon focused ventures. The facility will include a 17-hectare terminal with two berths, heavy-lift quays and up to eight hectares of quayside land open for development. Further expansions are expected in the future.

The offshore wind market has been growing at an exponential rate in the area, encouraging port development authorities to invest in creating support facilities and infrastructure for renewable companies. The Port of Blyth has seen a steady rise in the number of offshore wind companies setting up base there, while the Port of Tyne nearby launched a clean energy park last year. It also won the tender to be the maintenance base of the world’s largest offshore wind farm at Dogger Bank in the North Sea. Close on the heels of these developments was a report released last year which claimed that the offshore wind industry in the North East could create 4,500 jobs over the next five years.

Port of Blyth Chief Executive, Martin Lawlor, said: “The launch of the Bates Clean Energy Terminal represents another important milestone in the port’s development as a major offshore energy base and in our commitment to the national decarbonization strategy. With the support of national and regional partners, we are creating a unique opportunity for low carbon focused inward investment and are confident that this initiative will help to further expand the significant offshore energy supply chain already located around the Blyth Estuary.”

Right next to the Port of Blyth is the Offshore Renewable Energy Catapult, the UK’s leading technology innovation and research centre for offshore renewable energy. Britishvolt has also planned a gigafactory nearby, in the hopes that the renewable energy boom will also support innovation and popularisation of eMobility and charging infrastructure.