Electric vehicle (EV) charging operators are seeing a surge in demand around the globe. IEA has foreseen this demand and expects an additional 300-400 million EVs on the road by 2040. And around 43% of growth could come in from the APAC region.

Below, we have rounded up some of the star players among EV Charging Operators (in no particular order) and what they have been up to. 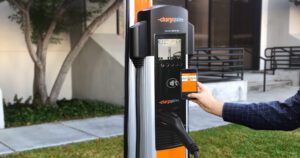 American company ChargePoint leads the EV charging world with one of the most inclusive and rapidly growing charging networks for EVs. They had recently passed an agreement with has·to·be and ViriCiti in order to bolster their fleet further. With these two acquisitions, ChargePoint claims to be the numéro uno in Europe and North America. Currently, they have over 200,000 roaming ports across North America and Europe. With such a large and established network, they have been able to avoid 450,000 metric tons of greenhouse gas (GHG) emissions globally.

An oil and gas company, Shell has been diligently investing in EV charging networks over the past years. NewMotion, a Shell subsidiary, offers access to a wide charging network of public charge points which would come up to 80,000 public charge points across 28 European countries. Recently, they installed 50,000 on-street EV charging points in the UK by 2025 and gained ubitricity, a leading European EV charger supplier of local authorities’ on-street EV power points. In fact, 500 of these high-powered fast chargers across 80 Shell stations near major European highways. Shell has also been partnering with IONITY for building a network that can charge EVs in less than 10 minutes.

BP’s EV charging network or BP pulse has had an active plan to roll out 1,400 by 2030. They are working on an agreement to partner with the UK’s largest network of EV charging points, Chargemaster. This will add 6,500 EV charging stations into the British oil and gas MNC’s portfolio. Apart from these, BP has made a joint venture with BMW Group and Daimler Mobility (each holding 33.3% share each) to form Digital Charging Solutions GmbH (DCS) for OEMs.

Probably the biggest name in EVs, their EV charging network is arguably the largest in the world. They own 25,000+ Superchargers globally and claim to fast charge Tesla vehicles in 15 mins. They have tailored it for Tesla cars alone. A few days ago, they reached a milestone by installing their 1000th supercharger in China.

A subset of the French MNC Engie, EVBox has installed over 190,000 charging points globally and has a presence in over 13 countries. They have joined hands with Everon and The Mobility House to give an enhanced version of the DCS to the DACH region (Germany, Austria and Switzerland).

The South Korean company expects 30% of its car sales to be from EVs by 2030. And they have been partnering with EV charging giants to build hi-speed charging networks across highways in South Korea to support this surge. Kia and Hyundai, both under the same group, are also working parallelly towards wireless electric vehicle charging systems as well.

The Swedish-Swiss MNC was in the spotlight recently over its recent Terra 360, which claims to charge an EV in 15 mins. They plan to roll it out in North America, Latin America and the Asia Pacific by 2022. Next year will also see ABB opening their electric vehicle charger business for a $3 billion IPO.

Currently, Blink Charging has deployed over 30,000 charging ports in over 13 countries. The American company plans to win investment to the tune of $150 billion to further tap into the EV charging market.

Follow Prospero Events to get more succinct reviews of the global energy market. Liked this article? A thumbs up or share would mean a lot!