What are the Top Methane Leakage Detection Technologies?

During these times of global warming, methane leakage should be the least of any company’s concerns. This odourless, dry gas is getting a bad rap, for they are 80 times more potent than C02 in increasing temperatures. Probably why every countries’ environmental agenda scrutinizes methane emissions.

The U.S. for one plans to signal methane out as it unveils its ambitious plans to reduce all Greenhouse Gas (GHG) in the next few years. This would be huge as the U.S. is one of the current top emitters of the gas alongside Russia and Turkmenistan, together producing a tenth of the global oil and gas industry’s methane emissions. China too is gung-ho with its first-ever pledge to contain methane production. Closer to home, the European Commission has launched an International Methane Emissions Observatory with the United Nations to tackle and control methane leaks.

Needless to state, there is a huge demand for methane leakage detecting technology. We can roughly divide the current tech schema into two segments. 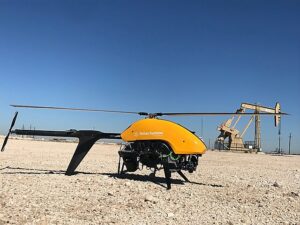 Shell launched a project with Avitas Systems to test drone-based remote inspection of assets in the Permian Basin. Credit: Shell.us

As you would have guessed, we are talking drones, specialised planes, and even satellites. For the uninitiated, satellites for gas leakage detection may appear far-fetched. But it is closer to the ground reality than you think.

Satellites have successfully monitored and tackled huge methane tufts worldwide. Recently satellite images have brought focus to some of the “ultra-emitter” sites in Russia and the U.S. This isn’t exactly new tech. However, up to this point, the pictures were ‌pretty generic. The European Space Agency (ESA) though, made things much clearer with their Sentinel-5 Precursor. Orbiting 16 times a day around the earth, the €240 million ($283 million) ESA satellite is capturing valuable data on methane and other gases and is giving their refined pictures for free. So that more businesses can investigate and be accountable. And with more innovations in tow, things are going to get mighty clear. Other dedicated satellites for methane gas leaks are MethaneSat and the twin GHG Inc. satellites Iris and Hugo.

Aeroplanes equipped with special imaging technologies have been used extensively for scouting methane leakage. Exxon Mobil and Bridger Photonics have worked with planes to narrow in on methane leaks in the Permian Basin. NASA’s contribution to leak detection, the King Air B200 ($5 million+ in cost) had also piqued interests when it identified over 550 leaks in California back in 2018.

Drones are the more cost-effective tech in this segment. Costing anywhere around $50,000-$200,000, they can visit sites several times a day, surveying 500 acres in 15 minutes. Royal Dutch Shell Plc partnered with Avitas to detect a potential leak from a hatch atop a high-elevation storage tank in the Permian Basin. The catch perhaps lies in policies governing drone usage and any privacy violation applicable. 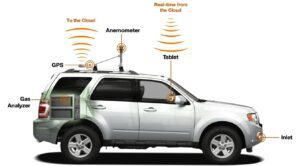 We can detect Methane with vehicles equipped with methane sensors, which are driven over the pipeline networks. One of the popular on-ground detecting vehicles is the Picaro vehicle-based sensor that uses a method called cavity ring-down spectroscopy.

Another option includes solar-powered methane detection devices such as Canary-X that have to be installed as a network on well sites. With a TrustWell ranking (an industry indicator of environmental compliance) linked to its usage, it is gaining favour with many oil and gas companies in the U.S.

Many environmentalists and independent researchers also depend on optical gas imaging cameras or tablets like the GF620 or the QL320. And there are the four-legged, good ol’ sniffers – the K9 units. Being specially trained as pups, these special units are adept at sniffing out micro leaks, sometimes better than digital detection devices.

Which tech would you rather use? We are curious to know!

You can also ‌look at our upcoming events for a deeper dive into the hottest topics in European Energy Industry.