A Finnish government minister’s visit to Berlin on Thursday did not yield a clearer timeline for a solution to the financial problems of German utility Uniper, Germany’s economy ministry said on Friday. 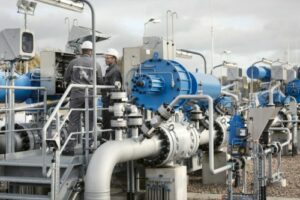 A Finnish government minister’s visit to Berlin on Thursday did not yield a clearer timeline for a solution to the financial problems of German utility Uniper, Germany’s economy ministry said on Friday.

“There is no real time frame,” a spokesperson for the ministry said, giving no details on the talks between the German government and Finnish Minister for European Affairs, Tytti Tuppurainen. Tuppurainen had said on Thursday that talks were advancing but still in a very critical and sensitive stage.

Uniper, Germany’s biggest gas importer, is subject to urgent consultations between the Berlin and Helsinki governments after it asked Berlin for a bailout to tackle financial problems caused by the scarcity of gas and sky-rocketing prices. State-dominated Finnish utility Fortum holds a 78% stake in Uniper.

A Uniper spokesperson said on Friday that the company is drawing down its underground gas reserves to fulfill parts of its delivery obligations as Russian shipments dropped to zero on the Nord Stream 1 link. “We are currently reducing our own booked gas volumes in our storage facilities in order to supply customers with gas and secure Uniper’s liquidity,” said the spokesperson. Uniper has storage facilities at Etzel, Epe, Bierwang and Breitbrunn, among other places.

On July 14, the build-up of German overall gas reserves for winter reversed into a small day-on-day fall for the first time. The energy network regulator reported Germany’s total storage capacity was 64.5% full, down 0.1 percentage point.

Ukraine and its allies have accused Russia of limiting the flow of energy to Europe deliberately in revenge for sanctions over Russia’s invasion of Ukraine, which Moscow describes as a “special military operation”. Russia says it is a reliable supplier that honours its contacts.