Vestas will supply the remaining 62 turbines of 372MW capacity to DTEK Renewables’ onshore wind farm in Tiligulska, which is expected to be operational by the end of 2022 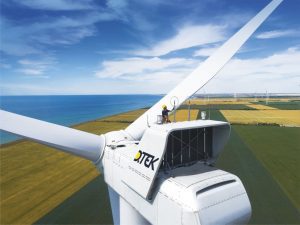 Vestas has made yet another addition in its European expansionist bid by securing an order for turbines with a capacity of 372MW for a Ukrainian wind farm. Known as the DTEK Tiligul project, the wind farm has an installed capacity of 500MW. The order has been placed by DTEK Renewables, the biggest renewables company in Ukraine.

As part of the order, Vestas will supply and install 62 of its V162-6.0MW turbines which operate on its proprietary EnVentus platform. Vestas has also entered into a long-term service and maintenance contract with DTEK for its turbines. As part of the agreement, Vestas will provide maintenance services for 20 years. Vestas received its first order for the Ukrainian farm in March this year. This order is Vestas’ biggest in Eastern Europe so far, and is also the first time EnVentus platform is being used in a Ukrainian wind farm. The DTEK Tiligul wind farm is expected to be operational towards the end of 2022.

DTEK Renewables has invested the largest capital in renewable energy among all Ukrainian firms. Commenting on the occasion, DTEK Renewables CEO Maris Kunickis said: “DTEK will continue to invest in clean and affordable energy to develop the renewable energy industry in Ukraine. Construction of a new Tiligulska wind farm will become a significant DTEK Group contribution to decarbonization of the Ukrainian’s economy and Europe as well.”

Nils de Baar, President of Vestas Northern & Central Europe, said: “Securing the 372 MW in the second phase of the Tiligul project is an important step for Vestas to take in applying our EnVentus platform in Ukraine. We’re delighted to continue our partnership with DTEK Renewables in delivering one of the most ambitious projects in Ukraine. Both phases of the Tiligul project are revolutionizing onshore wind in Ukraine with the implementation of industry-leading technology through our EnVentus platform.”