Some of the biggest power plants in the world today are renewable and virtual. The day of the prosumer has finally arrived. Will Virtual Power Plants help us create a climate-neutral, carbon-less ecosystem for the future? What are the challenges? 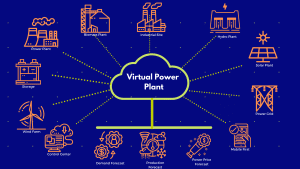 Tesla, the world leader in electric vehicles and battery technology, made waves when it announced its Virtual Power Plant (VPP) Phase 3 in South Australia with over 4,000 homes with solar PV and Powerwall battery systems signing up for it. They hope to up the ante and connect 50,000 homes, to become the world’s largest Virtual Power Plant.

The global Virtual Power Plant industry is valued at $3.3 billion this year. With the developed economies transitioning into a low-carbon future, the high growth speculated at a valuation of $8 Billion by 2025, seems legit.

What is a Virtual Power Plant?

A Virtual Power Plant is a network of decentralized, heterogeneous (traditional and renewable energy (RES)ources) as well as energy storage systems and flexible consumers. The central control room of the Virtual Power Plant can relieve the load on the grid by intelligently distributing the power generated by the individual units during periods of peak load Independent or storing or trading the power during periods of low demand. Smaller, independent owners of RES and storage systems are thus able to participate in the grid.

Virtual Power Plants gained momentum in Europe post-2010, partly due to Germany’s commitment to close its nuclear power plants. It ushered in economic and policy shifts within Germany’s and Europe’s stance on energy.

Now they are planning to deliver 1 GW of energy storage and utility-scale, flexible gas-powered generation in the UK.

Another name in the European Virtual Power Plants industry that has been silently harnessing the collective power of RES is Next-Kraftwerke. It operates one of the largest virtual power plants globally, with 9,000 aggregated assets and a capacity of 7,700 MW.

Jochen Schwill, CEO of Next Kraftwerke will speak at Virtual Power Plant 2020 on how to turn data from a VPP into actual use cases.

The reliability and energy efficiency of VPPs makes them suitable for industrial applications, helping them effectively manage their energy usage during peak load times. In Europe, the residential segment is yet to be explored to its full potential. VPPs are helping the integration of the demand side and supply side for optimal scheduling. A major reform push for smaller bids and smaller aggregators to join the VPP wave is much needed.

Providing Power without an Actual Plant

The benefits of VPP are apparent as it is decentralized power generation. The technology will make it easier to enter new markets as the VPP market players do not have to invest heavily in large physical power plants.

It provides greater flexibility, unlike a conventional single renewable energy source. For it can balance the grid by quickly adapting to the existing supply and using aggregated power, controlled with cloud-based tech to execute trades. Virtual Power Plants have exceeded the aggregated capacity of some of the largest nuclear power plants by optimizing networked assets.

Virtual Power Plants are enabling energy consumers to become prosumers. With the installation of solar panels and battery systems, they can participate in the grid, have more control over their energy usage and how much they pay for their energy consumption. As EVs become more ubiquitous, households will have additional energy storage capacity and Vehicle to Grid (V2G) technologies will gain prominence. The ‘distributed generation’ can be applied for commercial and industrial establishments to make a smart grid for an entire city.

Despite the relatively early start, the European VPP market is yet to mature. Though the potential to bring more independent, smaller, renewable energy sources into the grid is clear,

The complexity of managing multiple distributed assets can lead to its own unique set of interfacing challenges. Balancing the demand and supply in the grid gets more complicated when there are more sources involved. And as and when the assets increase the sheer volume of data available in real-time could be quite confounding or enlightening based on how we go on to interpret it.

Until multi-day mass energy storage of energy becomes more economically viable, flexible power generation is vital. VPPs are a clear solution for this. In addition to the interest from energy companies and owners of RES, there is also the need for a regulatory push to make it easier for VPP operators to actively participate in the grid.

Many major power companies do not have in-house platforms for running VPP operations. The big question is whether to develop a platform in-house or use the technology from a solution provider. This has led to a few interesting mergers, acquisitions, and partnerships.

Shell has acquired limejump and its digital energy platform, providing optimised routes to market for customers with electricity-generating or consuming assets in the UK.

Centrica, together with Sonnen has installed 100 domestic batteries in the UK to create a VPP;

Statkraft is working together with Energy Meteo Systems for another VPP in the UK.

Virtual Power Plants clearly will play a significant role in ushering in a greener future by enabling smaller, independent renewable energy sources to enter the grid and giving the consumer more flexibility in their energy consumption.

Join us on 1-2 December for “Virtual Power Plant 2020” to participate in discussions with experts and decision-makers from the market players in Virtual Power Plant technologies. An Expert panel from Next Kraftwerke, Enel X, E.ON, Siemens, EDP, SSE, Vestas.